A good portion of our tour with the Itoman City group was spent at the Okinawa Heiwa Kinen Koen or Peace Memorial Park. The park is the location of the southern memorial peace monuments erected in honor of the many victims of the worst tragedy in Okinawan history. The monuments were created in the hope of preventing the same tragic mistake again. 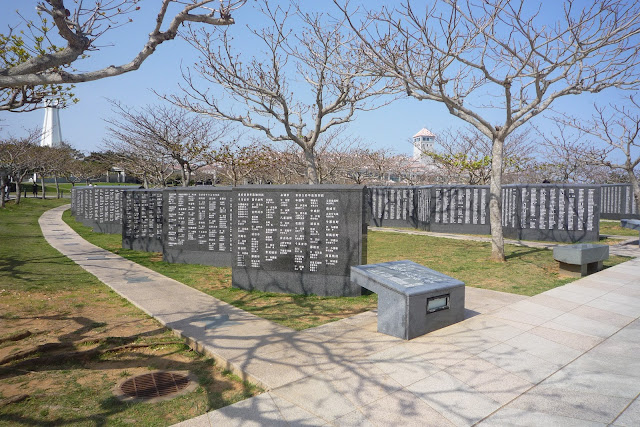 I had been to the peace park many times in the past while living in Okinawa during the eighties but the park has been greatly developed since then an has become a totally different environment today. Here is a video of our experience. You'll notice at the end of the film clip I found an elevator and took it to the top where I found an observatory deck where I was able to get some good shots of the park from above.


Towering over this extensive park is the Peace Prayer and Memorial Hall. Inside the hall there is a Peace Buddha and paintings done by artists from around the world, the hall represents the hope for world peace. 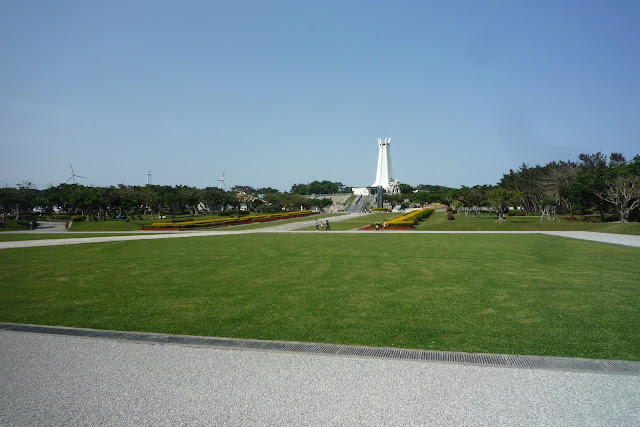 Adjacent to Memorial Hall is the Cornerstone of Peace and the stone wall monuments that hold the names of more than 234,000 people who lost their lives during the battle in Okinawa. It is very similar to the Vietnam war memorial in Washington DC but has many more names included here. 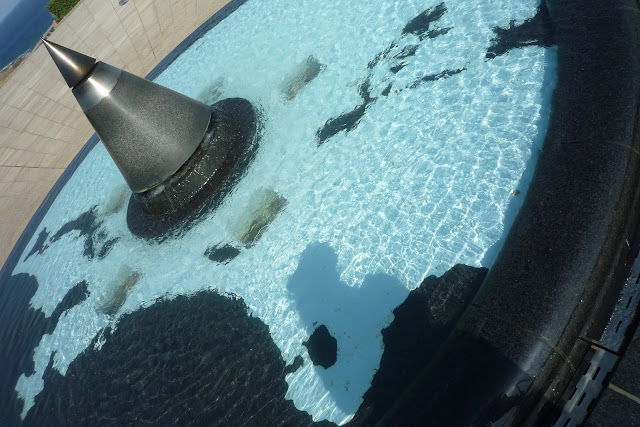 The Okinawan names included on the walls belong not only to victims from the Battle of Okinawa, but also to every known Okinawan who lost their life anywhere in the Pacific during World War II. It is estimated that one third of the island’s total population perished during that time. The walls also include the names of Japanese, Americans, and all other foreigners who died during the Battle of Okinawa. 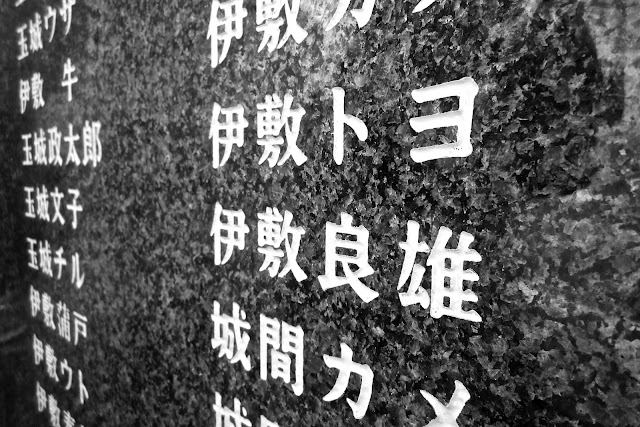 The rows of black granite engraved with names of the lost souls who are remembered here is a sobering sight. Nearly all Okinawans have a family members, relatives, or friends whose names are engraved on the walls. 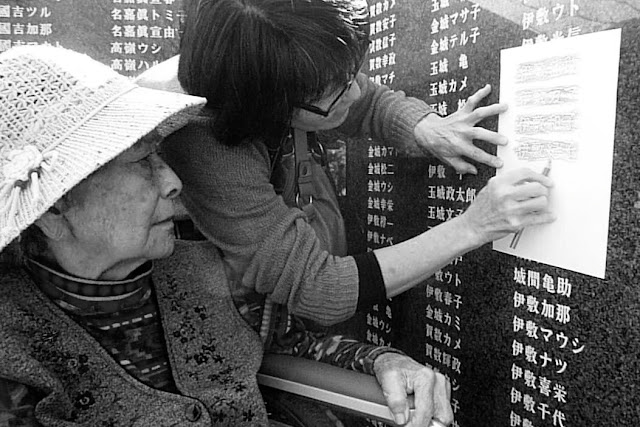 The park has been designed so that the sun will cast its shadow past the Cornerstone of  Peace and down the monuments center path on June 23 each year, the exact day the battle for Okinawa ended. Every year on this date (Irei no hi), a memorial service takes place and there are free music concerts are held at the park. Facing the ocean, you'll find “Monument Road” on the right, with its beautiful greenery and Ryukyu Matsu trees.  Follow the path and you'll find a beautiful view of the ocean which provides a stark contrast to the bloody scenes that took place on that spot in 1945. The cold, gray monuments, which were constructed along that path were erected there by Japan’s other prefectures to memorialize the soldiers from their prefecture who died in Okinawa. If you walk to the end of the road to find another monument on the very site where Lieutenant General Ushijima, Commander of the Japanese Imperial Army in Okinawa, killed himself before the island fell. 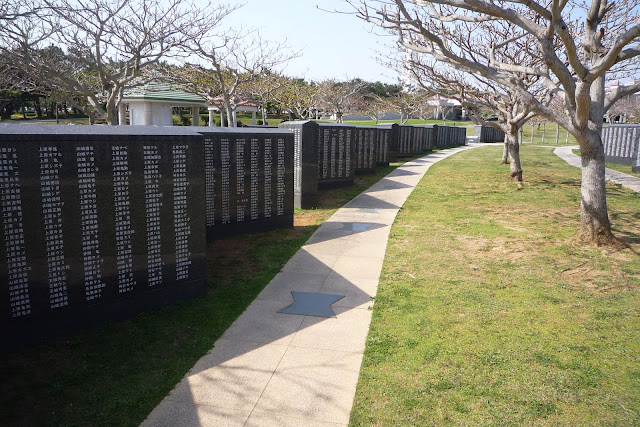 The Peace Memorial Park also has a beautifully designed museum. The museum features many historical artifacts from the war and written accounts by survivors. It incorporates an Information Center that focuses on the Battle of Okinawa with the theme of peace. The displays are very moving and there are explanations in English. The entrance fee is 1300 for adults and 1150 for students. The museum center is open everyday from 9 am to 5 p.m.

Who would consider a trip to a burial tomb to be a tourist attraction? Well one of the more unusual places we visited on the Itoman city tour was the Kohchi hara and Akahigi bara no Haka (The Kohchi and Akahigi Family Tombs). Here is a video followed by information about Okinawa and it burial traditions.


In Okinawa tombs hold the remains of all ancestors of one lineage, from father to son, to grandson, to great- grandson, continuing down the family tree. This means a tomb will contain all family remains under the male members of the family name including wives who married into the family but not the sisters unless they never married.

What makes the tombs of the Kohchi and Akahigi family special is that they contain the remains of more than 5,500 ancestors! These two family lineages have been traced back to 1684. Every deceased descendant from that time to today has found these tombs to be their final resting place.

Unlike the quiet and somber atmosphere you might expect from a visit to a western style graveyard, visits to Okinawan tombs are much happier. During the Seimei (shiimii) festival, which takes place on the 15th day of March according to the lunar calendar, Okinawans clean the area surrounding their ancestral tombs the day before. On the day of Seimei an abundance of food is prepared and brought to the family tomb. Family members then sit down in front of the tomb and enjoy food and drink in honor of their ancestors.

Traditionally, Okinawan people would place the body of their deceased ancestors inside the family tomb after performing various funeral rituals. The tomb will then be re-opened three years later and a female family member would perform the important task of cleaning the bones of the deceased. Before washing them, she would first remove any flesh that might remain. The bones would then be transferred to a special burial urn and placed back inside the tomb. Then thirty-three years later the tomb would be opened again and the bones removed from the urn. They would then be placed on a platform next to other ancestors completing the final burial rites.

After the war, the practice of cremating bodies became widely accepted and Okinawa’s bone-washing ritual gradually disappeared. Nowadays bodies are cremated and placed in an urn. The urns are then placed in the tomb with others that have been placed there before them. Okinawans consider a visit to the tomb as a visit with family and everyone love company.

To find the these family tombs in Itoman walking east from the Itoman Rotary to the second traffic light, a very small one-way street appears on the right side on the corner. This small road leads straight down to the tombs, which are on the left, behind the cement wall. To get there by vehicle, turn one block before the traffic signal and drive around the block.
Posted by Tom Corrao at 8:31 AM No comments: Links to this post 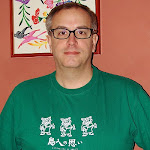